Seniors give advice to freshmen 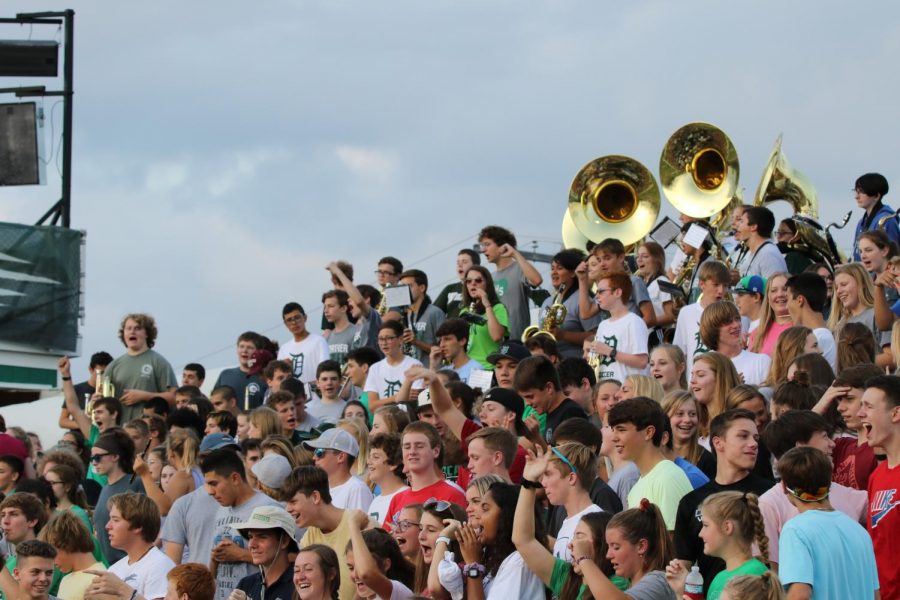 DHS students gather in the football stadium at the annual Fall Fest on Aug 23, 2019.

As a large class of freshmen embark on a new chapter in their lives inside the walls of De Soto High School, seniors reflect on their own time and pass on their gained wisdom.

DHS seniors have offered up advice to this year’s freshman class so that they can learn to make the most of their time at the school.

“I would say to make the most of their freshman year. Get involved. Go to games. Don’t be that one person that doesn’t want to go to a game or be antisocial,” senior Abby Martin said. “Just have fun and be involved.”

Martin became most involved in the De Soto Marching Wildcats and feels that she has found a new “family” amongst her band peers.

Senior Jack Loomis has additionally found acceptance from the band.

“Most of my most memorable memories from freshman and sophomore year are from extracurriculars like band and cross country,” Loomis said. “Any sport or activity that you can find will definitely create lasting memories and help contribute to your experience at DHS.”

Events such as band competitions—specifically winning the Baker Marching Festival—and cross country meets created an environment for Loomis that improved his experience at DHS.

Freshmen are also encouraged to get involved and grow relationships in school.

“I would say to get to know your teachers because a lot of them are pretty cool and some of them, despite what you might think, actually care about how you do in their classes and such,” senior Austin Bradley said.

Bradley emphasizes the importance of the relationships students create at DHS.

“I made some new friends [during freshman year] which was a cool thing. A lot of those relationships were things that I carried with me through the rest of high school and really value now and will probably value for years to come,” Bradley said.

Bradley also regrets not taking enough time to invest in these relationships because it is easy to get caught up in the large amount of homework that high school has to offer.

Loomis’ biggest regret was “letting all the homework pile up because it became a big habit.”

Loomis reminds freshmen that “teachers are definitely there to help you. As a freshman, I never took advantage of that.”

Students are encouraged to take full advantage of the help given to them and start positive habits early.

Martin advises freshmen to get into these good habits inside of the classroom so that they can enjoy the opportunities granted to them outside of the classroom. She also stresses the importance of having a good support network from friends as well as teachers.

“Choose your friends wisely. Don’t hang around the people that are going to be toxic to you or … get you in bad habits,” Martin said.

The seniors have learned lots of lessons throughout their time in high school and hope to spread their gained wisdom to the incoming freshman class of DHS.