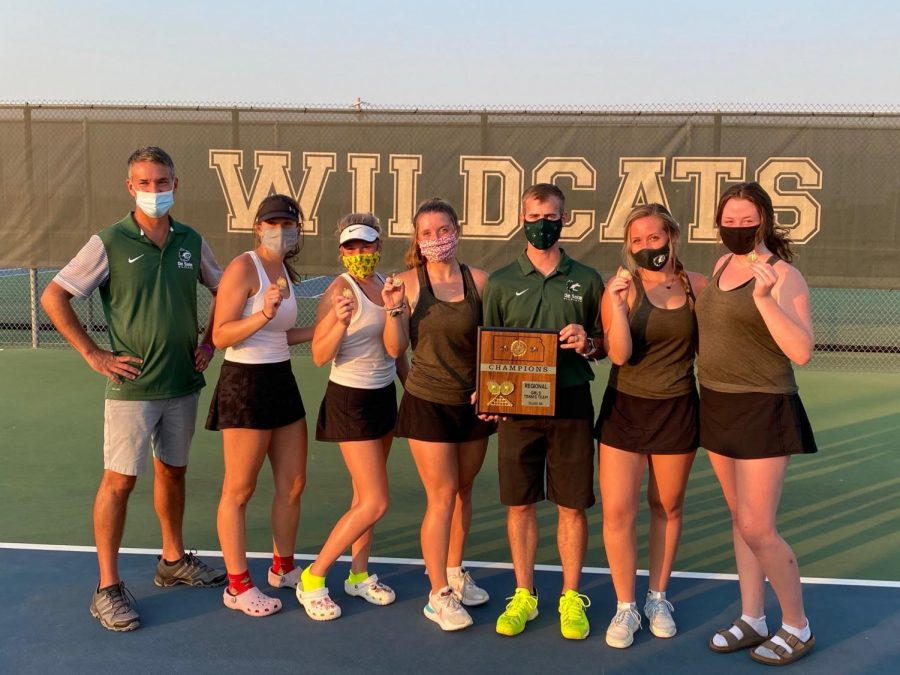 The De Soto High School girls’ tennis team poses for a picture after winning the Regional championship on Oct. 11.

The De Soto High School girls’ tennis team had every reason to make excuses amid the coronavirus pandemic, with meet changes and cancellations serving as constant problems during the fall season. However, the girls exceeded their expectations and captured a Regional championship on Saturday in stunning fashion.

Even head coach Justin Hoffman, who’s in his ninth season of coaching at De Soto, was surprised by the team’s Regional title.

“Winning Regionals, that was completely unexpected,” Hoffman said. “Easily the highlight of the year, especially winning at home.”

Heading into the season, Hoffman had one main goal, which was to complete a full season of tennis.

“My first goal was just to have a season,” Hoffman said. “I also always want to win conference and qualify as many people for State as possible.”

Another objective Hoffman had was to advance the skills of young players and help them develop throughout the fall.

“Of course, I always want everyone to improve, especially young players,” Hoffman said.

Despite the emphasis on the development of underclassmen, Hoffman wielded one of his most experienced varsity teams in his tenure at De Soto, consisting of only a single underclassman.

“Every team has their special moments. We have five seniors, so they’ve kind of grown up together,” Hoffman said. “There’s no division, and they all cheer for each other.”

Jenna Doran, a senior in her fourth and final year of her high school career, qualified for State for the first time on Saturday.

“It felt really good,” Doran said. “This year was my last chance, and I’ve been close in previous years, so that felt great.”

Doran also spoke to the highlights of her high school career and the tight-knit relationships that Hoffman previously described.

“My highlight has been playing varsity all four years and playing with some of my best friends,” Doran said.

Heading into the State tournament in Andover this weekend, Hoffman is aware of the challenges that come at the state level.

“There’s four single players from the Wichita region that will place one through four, one of which is a three-time State champion,” Hoffman said. “Hallie [Scott] definitely faces a tough field.”

The number of qualifiers from each region was also changed from six to four this year, which increases the level of competition at the State tournament.

“I would love for someone to place top eight, but it will be difficult,” Hoffman said.

Despite facing fierce competition, De Soto continues to aim for a successful State tournament. Coming off an unexpected Regional championship, the girls will once again look to surprise teams in Andover. They’re no strangers to adversity.