Wildcat volleyball begins the season on a tear 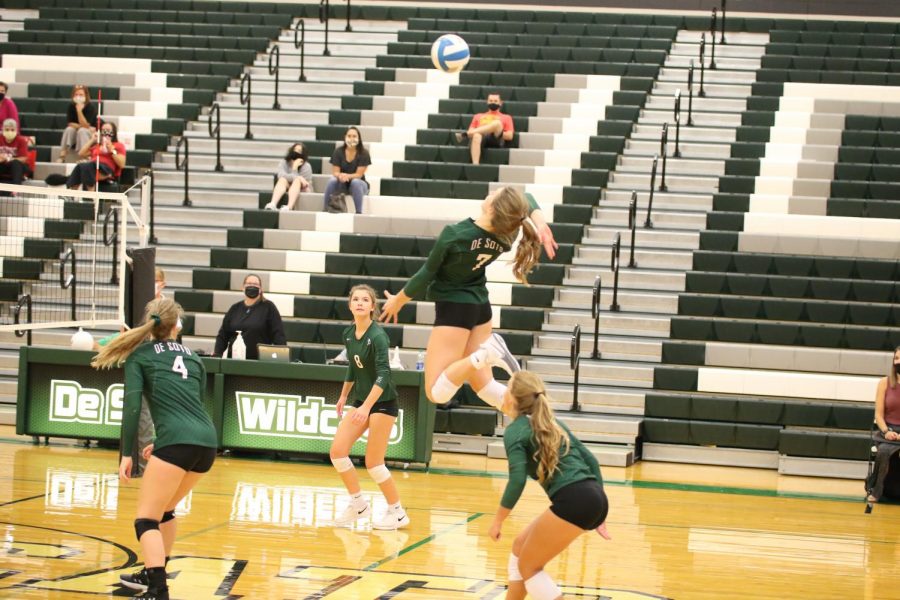 Senior outside hitter Brooke Stonestreet goes up for an attack in the Wildcats victory over Shawnee Mission North on Sept. 17.

The De Soto High School volleyball team is looking to keep the ball rolling after a strong 13-5 start through the first three weeks of the season.

Head coach Lindsay Hothan credited teamwork and positive attitudes as some reasons the team has had such an impressive start.

“Our girls have been working really well together. They have fun out on the court together and celebrate each other. I think that positive team chemistry has been a contributor to our success,” Hothan said.

Hothan has been the head volleyball coach for nine years now, with all except last season, ending with a winning record. That winning culture of De Soto volleyball has been built by the girls over the years and is something that Hothan believes is a big motivator for her team.

“They want to have a winning season this year. That’s something they want to get back to. The girls over the years have worked really hard to establish De Soto High School volleyball as a respectable and competitive program,” Hothan said.

The positivity and competitiveness the team brings can also be credited to how the season began with the COVID-19 pandemic threatening to take the season away entirely. This has seemed to put an even bigger emphasis on doing the little things right in practice and being able to improve as a team with the time they have left to play together.

“They’re very grateful to have the opportunity to play, and that’s something that they don’t want to take for granted. We’re not perfect, but it’s [COVID guidelines] something that we do focus on,” Hothan said.

Unfortunately, the team has taken some tough losses at this point in the season, one being against district rival Mill Valley.

“Credit to them, they really have a solid team. We have a really good team too, but we just did not execute. Defensively and offensively we were not at our best, but it is something we will have to learn from as we get closer to the postseason,” Hothan said.

While the postseason is always in Hothan and her team’s mind, improvements and competition in practice are always the main focus for the team.

“We continue to play competitive teams, we continue to watch film, look at stats, and do our best to learn about ourselves as much about who we are playing,” Hothan said.

The team’s ability to adjust to their opponents will continue to be put to the test this season. The Wildcats improved to 2-1 in the United Kansas Conference after defeating Shawnee Heights 3-1 Sept. 29.

“It was all about communication. We had to stick together. We really came together as a team and showed that we work extremely well together as a unit,” junior Gracey Jane said about the win.