Not one, but two!

Boys and girls punch their tickets to State basketball tournament 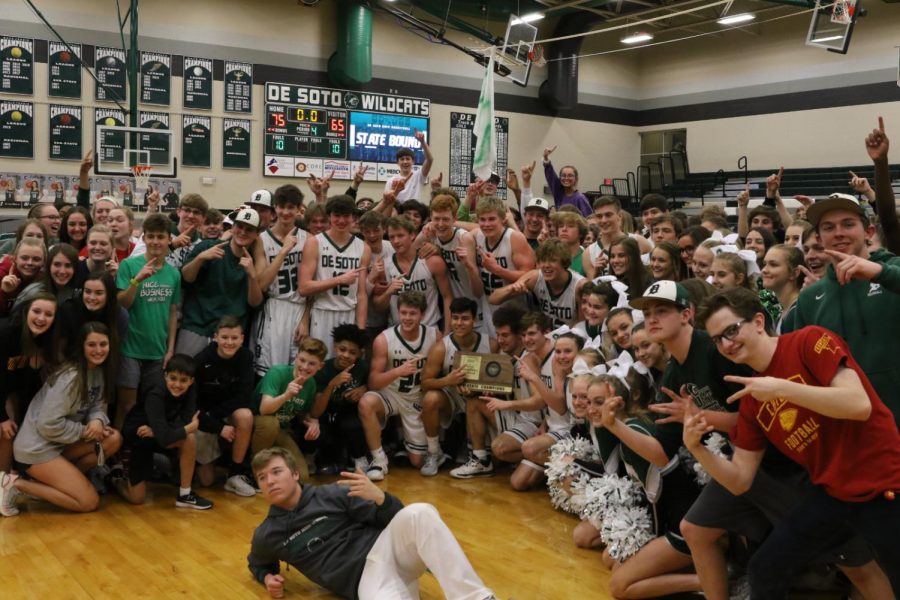 Both the girls’ and boys’ basketball teams at De Soto High School qualified for State, accomplishing something that has been a goal from the beginning of their seasons. The boys are scheduled to compete at Emporia State University on March 11. The girls game will follow on March 12.

With an impressive win over Washington in the Sub-State championship, the boys’ team is riding high. It will be the first time since 1994 that a DHS boys’ basketball team will compete in the State tournament. With this in mind, boys’ head coach Matt Rice is proud of all the team has accomplished.

“Of course I thought it [going to State] was a possibility, but it was not what I anticipated. This group has exceeded my expectations through the regular season and into the postseason,” Rice said.

With a tough season, the team ended with a record of 16-6, a big improvement compared to their six win season last year. This will be Rice’s first trip to the State tournament, a moment he has been waiting for since he came on as head coach 10 years ago.

“It was a little emotional at the end of the game on Friday. First, the crowd was amazing so the adrenaline was already running high,” Rice said. “I had been close several times, [to State] we had some really good teams that weren’t able to make it to State so I was riding pretty high for sure.”

Rice and his team are now set to play the quarterfinal of the State tournament against Kapaun Mt. Carmel. Junior center Nate Barnhart is very confident in his team, and believes that their biggest strength goes beyond just basketball.

“I think our biggest strength is how we’ve all known each other for quite a long time and grown up with each other,” Barnhart said. “We’ve known one another and competed growing up and we all have that good connection.”

In the win against Washington, Barnhart played aggressively and scored 30 points while also snagging 16 rebounds. Barnhart expects to play at the same level against Kapaun with the hopes to advance to the semifinals. 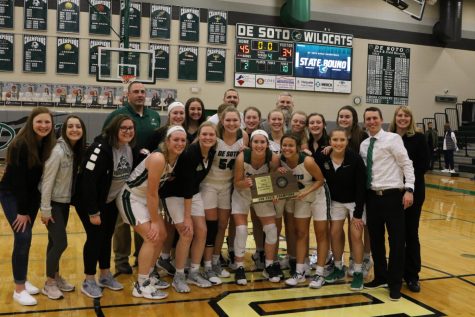 Along with the great accomplishments from the boys, it is not to be forgotten that the girls’ team has accomplished their goals as well. The girls’ basketball team shares the same 16-6 record and also qualified for the State tournament for the third time in five years. This recent success is due to a strong, disciplined group of seniors as well as proper coaching from head coach Ryan Robie.

The day of the qualifier, there were many things that could’ve been running through Robie’s team’s head, but he wasn’t anxious about the game whatsoever.

“To be real honest with you, when I saw everyone walk in I had a great feeling about how we were gonna play that night  Everybody was loose, and it was probably the most excited I had seen my team all year long.,” Robie said. “It wasn’t nervous energy, it was just good energy.”

The good energy that Robie alluded to was only intensified by their win that night. For senior Lamyah Ricks, the winning moment she shared with her teammates was worth all four years of hard work.

“It was a surreal moment. It was just an adrenaline rush, and seeing the boys do it the night before made us want to replicate the exact same thing,” Ricks said.

With the great season that the girls had, they earned their spot in the tournament, and are scheduled to play against Andover Central in the first round of bracket play. Both Robie and his team are ecstatic for the opportunity to show others why DHS deserves to be in the tournament.

“We go in as the seven seed, but to me we are an incredibly dangerous seven seed. We have all the pieces to be successful, but the crazy thing is that you look at the 5A field and it’s loaded. There’s not a bad team in that field. It’s a loaded field and we feel like we belong,” Robie said.

For the first time ever, both teams from De Soto have punched their ticket to the tournament. The State tournament at Emporia this year will be a unique opportunity for both De Soto basketball teams to show their skills and establish their spot as a true contender for the State title.