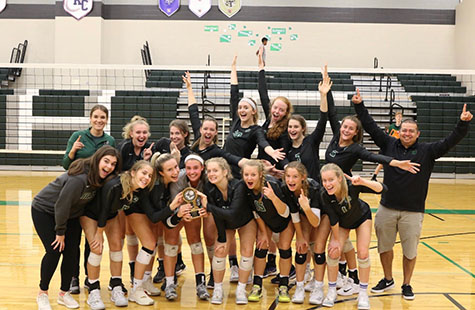 The De Soto High School volleyball team defeated Lansing in the championship match of the Spikefest tournament on Oct. 5.

DHS hosts Spikefest every year, and head coach Lindsay Hothan hasn’t seen many victories from the Wildcats in the eight years that she has coached the team.

“We’ve participated in Spikefest ever since I can remember,” Hothan said. “Last year was the first year since I’ve been here that we’ve won.”

Having already lost to Lansing three times this season, the Wildcats knew that they would be up for a challenge when battling the Lions for the championship title.

“We always see Lansing in the Spikefest tournament. It seems like every year we end up playing them at the end,” Hothan said. “We knew it was going to be a physically and mentally tough match, but the girls overcame that and did a great job.”

Although the Wildcats defeated five teams on their journey to victory, Hothan believes that there are still improvements to be made before the end of the girls’ season.

“I think our biggest challenge during the tournament was our consistency and the way in which we were approaching each match,” Hothan said. “We have to, regardless of who we’re playing, approach every match with the same mindset.”

Apart from the struggle for consistency, Hothan feels that the team demonstrated notable improvement and earned a well-deserved win.

“The intensity the girls showed and the energy out on the court definitely gave them a competitive edge,” Hothan said. “Our serving was key to our win in that championship match, and our middle blockers did an excellent job with their attacking, which allowed us to be very successful.”

With triumph on their minds, the Wildcats are excited to see what the postseason will bring for their team.

“I think that win over Lansing definitely gave the girls a confidence boost, and we need that. It’s not going to get any easier. It’s going to get tougher as we continue,” Hothan said. “I just want [the girls] to go out there, trust their training, have fun, put their heart out there, play for each other, play for our school and trust that what we’ve done up until this point has prepared them to be successful.”