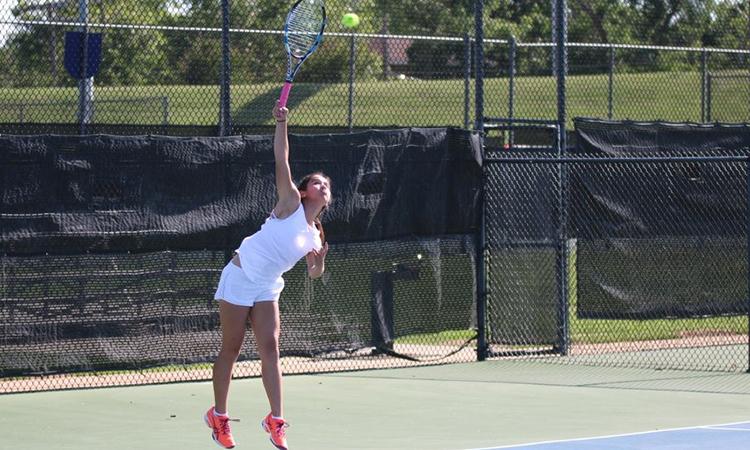 Freshman Issa Sullivan serves the ball during a match at the USTA Missouri Valley Team Championships, which were held in Oklahoma City, May 28-30, 2016.

Sullivan plays competitively throughout the year at the Marchetti Tennis Academy, but like other KSHSAA sports she is restricted from competing in any club group activity when the high school season starts.

In tournament play, Sullivan plays both singles and doubles, but plays singles more competitively, because for Sullivan “doubles is more for fun.”

Sullivan has worked very hard to achieve her goals and improve her rankings.

“My dad signs me up for all of my tournaments and does things to help my ranking and tennis recruiting for college,” Sullivan said.

Sullivan explained that she is ranked second in the class of 2020 in the state of Kansas in the tennisrecruitin.net rankings. In the Missouri Valley section of the United States Tennis Association, which consist of Kansas, Missouri, Iowa, Oklahoma and Nebraska, Sullivan has been ranked in the top-25 regularly in her age group the last three years.

“Right now in the Valley I’ve dropped because I haven’t played a match in a really long time. At nationals, my [Valley] ranking was 18th at the time, but I’m not sure what my national ranking was,” Sullivan said.

Sullivan has not been able to play a match for DHS this year due to injuries, which started late in summer while playing in the National Clay Court Championships in Florida. However, she recently got the green light to return to limited action.

“I haven’t played a match since Nationals at the end of July,” Sullivan said. “I got cleared to do some light hitting this week, and I might do a match, but I would have to do a underhand serve, which is very hard to do.”

Her father, journalism teacher Michael Sullivan who is also an assistant coach for the De Soto girls’ team, is hopeful but cautious on when she will be able to return.

“We are being very careful while she recovers,” coach Sullivan said. “I can tell that she is starting to get anxious about finally getting her first high school match, but we have to think about her long-term health. That is the most important thing right now … but she really wants to get back out there and compete.”

For Issa, missing the season so far has been extremely difficult.

“It’s really hard watching the team because I’m used to playing multiple hours every day, and I miss the sport,” Issa said. “This summer, it was a really big part of my life … it’s what I pretty much did the whole entire summer, and its really weird not doing it all the time.”

The competition is part of what drew Issa to the sport, adding “I really like the individuality in tennis too.”

“In my tennis club, I am really good friends with everyone because we all spent the whole entire summer together, and I like traveling to tournaments with my friends,” Issa said.