The effects of an early school start time 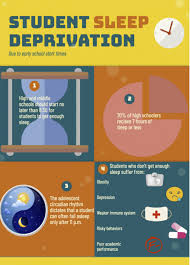 The De Soto School District recently had a late start day where students showed up to school two hours later than normal.

I personally experienced a much more productive and enjoyable school day. On a normal day, I dread going to school, and I rarely have the motivation to get a lot of school work done while at school or after school as homework.

I was not the only one that felt more energized. Throughout the day, everybody I encountered was much happier to be at school than they are on a normal school day.

This is because most high school students do not get their recommended eight to 10 hours of sleep. Starting school even a little bit later will allow students to get enough sleep.

There is even a recent Instagram account that has been made from all of the influx of sleeping students. The account posts students sleeping throughout the school day.

Extra sleep will give students many benefits in the long run. According to the U.S. Department of Health and Human Services people who get proper sleep get sick less often, have less stress, have a lower risk of health problems and get along better with their peers.

Harvard Medical School claims there is a direct correlation with sleep and learning as well as memory. The study shows that sleep-deprived people cannot focus, therefore they can’t learn as efficiently as those who are well-rested.

Also, enough has a crucial role in improving memory, which is also important for learning and gathering new material.

All of these things will benefit the school in the long run as it would create a more productive school environment. Kids would be more attentive and their grades will improve.

This is not a problem for just a small percentage of teenagers, over 70 percent of teenagers do not get enough sleep. This large population of teenagers are instead getting between six and a half to seven and a half hours of sleep.

The USD 232’s 7:50 a.m. start time is not adequate for teenagers who are proven to need later sleep onset and wake-up times.

The school district should go by the American Academy of Pediatrics recommended start time of 8:30 a.m. or later.

The early start time has been proven by countless studies to increase bullying, athletic injuries, alcohol and drug use, car accidents and even depressive symptoms.

The benefits of starting school later are astronomical. The district should take action as soon as possible.