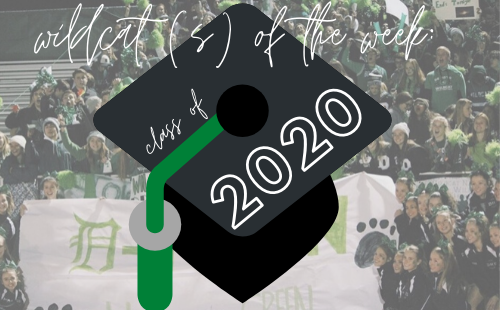 There were a lot of different ways that I thought about writing my final web story ever, aside from my letter to the staff. After getting the privilege to shed light on different students and their stories across my journalism career, I decided to write my last Wildcat of the Week, during the last week of high school, about you guys: the 2020 senior class.

The senior class of 2020 is special, and I don’t think anybody can really try to challenge me on this one. We’re the 100th class to come through De Soto High School, and we’re graduating in a “double date” year. But on top of that, every single person in this class is accomplished in some way, shape or form. Whether you were on the football team that fought their toughest game against Mill Valley and played in the Sub-State game against Bishop Miege in 2017, on the boys’ basketball game that went to a State tournament for the first time since 1994, on the girls’ basketball team that went to the State tournament for the third time in five years, played a lead in Mamma Mia, were the captain of the dance team, lead the Eco Club, participated in Scholar’s Bowl, competed in Science Olympiad, played an instrument, bowled, ran, swam, jumped, wrote or photographed everything that happened, you are accomplished. Everyone in this senior class brought something to the table and brought something to the De Soto High School community that is like no other.

To all of the spring athletes that didn’t get to compete in their season, you are special too. You worked day in and day out all of the pre-season and even the short time that we had in the regular season, and you were ready to give your all to a season that didn’t even get to happen. To my soccer girls that endured boot camp, ran until your legs went numb,and sweat relentlessly during coach King’s workouts, I am so unbelievably proud of you guys. Every single one of you gave your all to that sport, and I’m so lucky that I got to play with every single one of you. Playing my senior season with you guys would have been one of the most insanely fun and successful seasons that I ever got and it would’ve been the best way to say a final goodbye to my soccer career.

Even though our senior year was cut short, I’m grateful for every moment that the Class of 2020 got to spend together while we still had it. We tailgated at football games, sang “Hey Baby!” together in the front rows of the stadium stands before the fourth quarter, sat outside the gates the day of the Mill Valley game for four hours, screamed our lungs out cheering as De Soto took the field against Mill Valley, covered the union in decorations for the Green Grenade, played in the Powderpuff football game, road the floats in the homecoming parade, stormed the court when both basketball teams went to State, and had to say goodbye to De Soto High School together when we realized that we’d never get to go back.

We all walked out of DHS that day without knowing we would never come back, and sometimes I wished I would’ve soaked it in a little longer. I didn’t even go to my last College Algebra class and get to say goodbye Susan Coffee at the end of the day for the last time. I didn’t get to say goodbye to Mrs. Lehrman, my biggest supporter, or Mr. Robie, probably one of the most positive people I’ve ever met in my life. We all had to say goodbye to our favorite teachers and our favorite memories a little too soon. But looking back on it, I wouldn’t trade the three quarters of my senior year that I got for the world. Maybe this is an unpopular opinion, but I’ll say it anyway; if I had to give up all of the amazing memories I made from August to March just to get my last quarter of senior year, I don’t know if I would do it.

The Class of 2020 has always been special, aside from being the 100th class or graduating in a double year. It is made up of the most unique, hard working, exceptional people that I know and I don’t think I’d want to be a part of any other graduating class at any other school no matter how it ended. So here’s to the Class of 2020 on our last week ever of high school; all of you are special enough to be the Wildcat of the Week.