The barrier of language 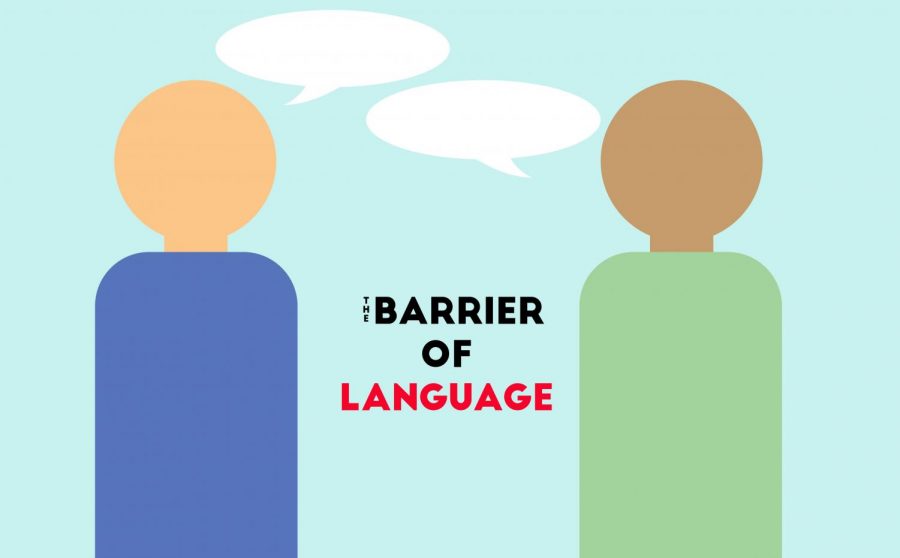 English Second Language, or ESL, students at De Soto High School sometimes know little to no English, making every aspect of their experience in the DHS community difficult.

There is a social segregation at De Soto High School. You can see it in the hallways. The lunchroom. The classroom. It has become a sort of unspoken thing, but everyone has noticed, at one point or another, the one group that has been decidedly left alone by the majority of the student body. I’m talking about the English Second Language students: students whose primary language is not English.

Oftentimes these students’ primary language is Spanish, and the divide between them and the majority primary English-speaking population is evidence of the lack of common ground between the two groups. This division, though mostly based on language, also happens to mostly fall along racial lines – ELL students tend to be Hispanic. This unique cultural makeup of DHS therefore allows for an opportunity to reckon with racial issues as a student body, diminishing the reality of stereotypes and making progress towards appreciating diversity.

“I know there is a lack [of interaction],” said ESL paraprofessional Michele McGary. “I feel like there’s also, because there’s a diversity of grades within here [ESL Seminar], some of the freshman don’t get to do the mentor stuff that they’re actually doing during Seminar because they’re mixed with other grades. So we don’t really have a mentor so they feel like they’re left out.”

Not only are students left out of the community of students in Seminar in their age group because they have to go to an ESL class during Seminar, students also must work fairly independently in classrooms where neither the teacher nor other students speak Spanish. Alycia Villa knows little to no English and as a result can’t communicate with anyone else in her class, which forces her to complete assignments by herself, an arrangement McGary said was “really hard [for her] because she doesn’t get that much of an interaction with other students.”

As an analogy, Villa’s situation would be as if English-speaking students had to take every class in Spanish and most of their peers solely spoke that language. Many students at DHS would be unable to fathom the difficulty that language barrier would entail, both socially and academically.

“It would be great having a teacher that also knows Spanish as well because then I’m able to learn the English from them and they’re able to learn the Spanish from me as well,” Villa said using McGary as a translator. “We could help each other and be able to communicate more.”

A possible solution would be to require that every student at DHS takes a foreign language class, and that faculty also work to gain experience in foreign languages to communicate more effectively with ESL students. Considering ESL students are learning English in order to communicate with the rest of the school, it only makes sense to attempt to build the bridge from both sides, rather than putting the burden on a single group of students.

“There are some [students and teachers] that know the basic stuff that do try to talk to her [Villa] and she enjoys it, so if there were more students that were more fluent because they were required to take Spanish or something that would be really great,” McGary said.

In an increasingly global society, the concept that others should be required to learn English for us to communicate with them is also not only selfish, it is also isolative in practice. In the United States, the two foreign languages offered at De Soto High School, Spanish and French, are the primary languages of 41.7 million Americans. Respecting the culture that is propagated through a language as a result of foreign language education is also an inherently good thing, reducing prejudice and the use of stereotypes to understand people of differing cultures.

In addition, the utility of being multilingual beyond high school is an important concern for the preparedness of all students, no matter what field they go into after graduation.

“I think it’s like any other required subject, we want our students to be well-rounded, and be able to succeed after high school whether it is in the university setting or it is in a trade school or in the military,” Spanish teacher Nancy Perry said. “You can use a foreign language anywhere.”

Another possible fix would be to start a Spanish or Hispanic club at DHS, something McGary said would be a big positive because “a lot of the students don’t get involved because of [the] language barrier.”

These two possible solutions are not exclusive of one another, nor would they be a complete panacea to DHS’s fractured community. However, it is still important that this issue gets addressed, either from a student or administrative perspective to at least make strides towards inclusion. Everyone is familiar with the feeling of being excluded in high school, so all students should be able to empathize with the plight of ESL students who tend to fall through the cracks. Empathy and common ground are essential to treating others with respect, and these can only be gained by increasing interaction with “out” groups. So for the sake of hard-working but excluded students like Villa in the ESL program, it is time to begin scaling the barrier of language.