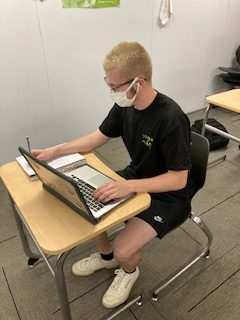 Junior Kendan Powers studies for the AP Calculus exam on May 1.

For several students at De Soto High School, the month of May marks the beginning of a rigorous final stretch of academic workload, highlighted by AP exams. Students enrolled in AP classes are given the opportunity to take an AP test in order to receive college credit. However, there are few students who have the courage to brave the brutal exams.

Part of the difficulty regarding AP tests is that the exams are in close proximity to each other. Junior Kyle Newberry spoke to the challenges of taking multiple tests in the same week.

“It [taking tests] was exhausting,” Newberry said. “Spending so many hours each day on tests really crunched down time to study.”

“Having the AP Seminar and APLAC exams back to back was a lot of writing, so that was difficult,” Powers said.

Studying for AP tests requires just as much effort as taking the exams themselves. Students frequently spend the weeks leading up to the tests preparing and going over material from the past two semesters.

“My studying was pretty course specific,” Powers said. “I practiced different timed writings for APLAC, and used the practice tests in the AP Physics book.”

Other students, like Newberry, took different approaches to studying.

“I did a lot of cram studying,” Newberry said. “After I finished one test, I’d start studying for the next test. After finishing that one, I’d study for the next, and so on.”

In order to prepare effectively, students recall knowledge and information they have worked hard to learn over the course of the past year. AP courses are not for the faint of heart, and have forced students to change their study habits and improve their time management skills.

“I’ve had to not procrastinate as much, which is difficult,” junior Sara Murphy said. “I try to manage time better and find ways to de-stress.”

Newberry has also had to adjust his academic habits and increase the amount of time he put into schoolwork.

“I spend a lot of late nights getting homework done,” Newberry said. “I’ve also had to prioritize studying.”

Although trials and tribulations of heavy course loads can be overwhelming at times, students at DHS have been reaping the benefits of higher level classes.

Newberry, who is enrolled in four AP courses, spoke to the positive impacts the classes have had.

“They [AP classes] have helped me develop strategies for dealing with immense workloads,” Newberry said.

“I have definitely learned how to deal with stress more and not feel overwhelmed with large workloads,” Murphy said.

Although academic improvements act as additional benefits to AP courses, the main reason for enrolling in AP classes is the opportunity for college credit. While some courses offer college credit through Johnson County Community College, most credit hours are earned through AP testing.

“For all the exams I took, I had to take the exam in order to receive college credit,” Powers said.

“I took them [AP exams] to pay for college classes, so it won’t cost as much in the future,” Murphy said.

The difficulty of AP exams often steer students away from taking them, due to the challenging questions and essays, along with the large amounts of studying that is required. However, a select group of students at DHS summon the courage to test their knowledge and take a crack at earning college credit, making them true AP warriors.