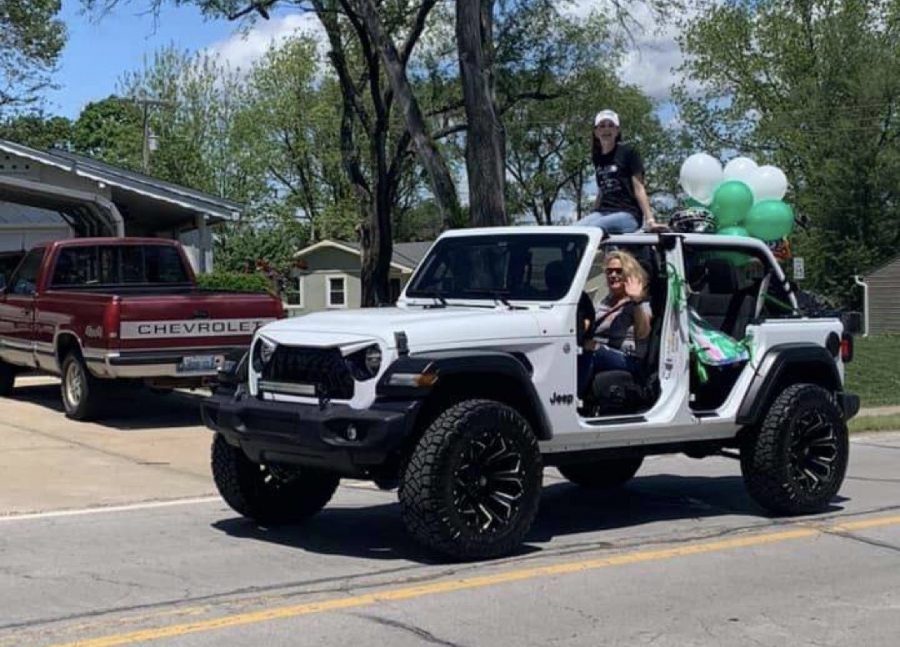 Senior Mason Johannes rides through celebratory graduation parade with her mom and dad on Sunday, May 17.

In the midst of the COVID-19 pandemic, De Soto High School seniors have experienced a lack of closure regarding the end of their high school careers. However, the De Soto community recently came together to celebrate DHS seniors with a graduation parade on Sunday, May 17.

The parade was organized as a way to recognize the accomplishments of DHS seniors. Every senior that wished to be a part of the event had the opportunity.

“Any senior was allowed to participate, and you could dress up and decorate your car anyway you wanted to, which was super fun,” senior Emma VanLerberg-June said.

Many seniors decided to participate in the parade as a way to say goodbye to their classmates. Although not in typical fashion, the class of 2020 was able to gather together for a celebratory event, rather than remaining in their homes.

“Even though our [in-person graduation] ceremony is scheduled in July, there is still a lot of uncertainty about if that will still be a possibility in the future, and I felt like this could be the last time the senior class would be able to get together,” senior Mason Johannes said.

For many seniors, the most exciting part of the parade was getting to celebrate with friends, family and DHS staff members.

“Parents either drove their kids around or were on the sides of the streets to cheer us on. A lot of staff members were on the side also telling us congrats as we drove by, which made it ten times better,” VanLerberg-June said. “I honestly felt like a celebrity going through the streets and having everyone yell for me and my friends, and I’m just super grateful that we all got to experience that.”

Having staff members in the parade crowds was one of the most memorable moments for some seniors, as many have known the teachers and staff for a majority of their high school careers.

“I saw a ton of staff and their families at the parade, which was really exciting because I hadn’t seen them since March,” Johannes said.

Seeing the support from so many people was very impactful for the seniors because group gatherings have been a rarity over the past few months due to social distancing requirements.

“It was a really awesome experience because so many people came together to support us, even though there are so many restrictions and worries about everything going on,” Johannes said.

Overall, the class of 2020 was grateful for the immense support from the De Soto community as a whole.

“The parade showed all of us that De Soto truly loves its students and wants them to experience everything fun during their high school career,” VanLerberg-June said. “The community of De Soto is very supportive and shows love to the district.”

Even though the class of 2020 has missed out on a traditional May graduation ceremony, the seniors feel as though this parade somewhat compensated for the lack of closure they have received as their high school careers have come to an end.

“[The parade] did provide closure because it was kind of reassuring that we got to do one last thing together,” senior Leelah Breaux said.

With the upcoming graduation situation being uncertain, Johannes feels that the parade was a great event to bring a sense of comfort to the senior class.

“For me, this all still doesn’t seem real, but I think in ways it did definitely give me some closure over our special graduation circumstances,” Johannes said.

Although the parade was specifically organized for this years’ graduating class, the event is something that could be continued for upcoming seniors in the future.

“I think it would be a really cool tradition to create for future seniors because it gives the community the opportunity to see us graduate, not just family,” Johannes said.