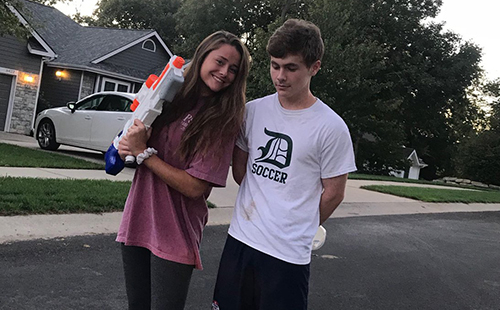 Seniors Loren Hinkle and Daniel Apple pose for a picture after Hinkle 'assassinated' Apple with a water gun on Sept. 26.

In the duration of a student’s senior year, there are many traditions they can be involved in. One of the most popular of these traditions is the student-led game of senior assassins.

Each year, there are one or two juniors who take on the role of organizing the game, and this year, juniors Chase Culver and Camryn Robbinson stepped up to the position. Culver and Robbinson’s responsibilities include updating the Twitter page, @DHSAssasin2019, and assigning seniors their targets via direct message.

“Camryn and I chose to be in charge of senior assassins because we wanted the seniors to have a functional game, and we felt that we could run it best,” Culver said.

The rules of the game are thoroughly explained on the Twitter page. Every senior who pays the $3 admission fee is able to participate and was given their first target on Sept. 23. The seniors were given a deadline of one week to “kill” their target by spraying or splashing them with water without being “killed” by their assassin in order to continue to the next round.

After getting their target wet, it is required that the players report their assassination to Culver and Robbinson by direct messaging them. They made it clear that the requirements of a confirmed assassination is to be sent a picture of the killer and who they killed, along with the date, time, location and how they were killed.

However, assassins is not permitted to be played in the “no-kill zones” listed in the rules. These zones include school property, school sporting events, during a target’s work shift, the target’s house unless the assassin is invited over, inside of cars and religious places.

“We have strict ‘no kill zones’ because we do not want to put players in danger or effect the school environment in a negative way,” Culver said.

Other rules include not hurting a target with an assassination and the restriction against hiring a “hitman” to kill a target. One other rule is the access to five-minute immunity from an assassin if “two handfuls of dry rice is thrown at them before the assassination.”

Senior Hannah Wilson is participating in senior assassins and was not expecting the game to be as stressful as it has proven to be.

“I feel like anywhere I go there will be someone [my assassin] there waiting for me, and it makes me really paranoid,” Wilson said.

The winner of assassins also wins the pool of every participants $3 admission fee, so there is a substantial amount of money on the line for this game.

Despite low participation, the tradition of senior assassins is still alive at DHS, and Culver encourages the current junior class to participate in next year’s game.

“Due to the fact that this years’ senior class had such little participation, we have been encouraging our class to participate so it can be as well-known and fun as possible,” Culver said.