Wildcat of the Week: Marshall Kellner

Senior set to play football at Kansas State next fall 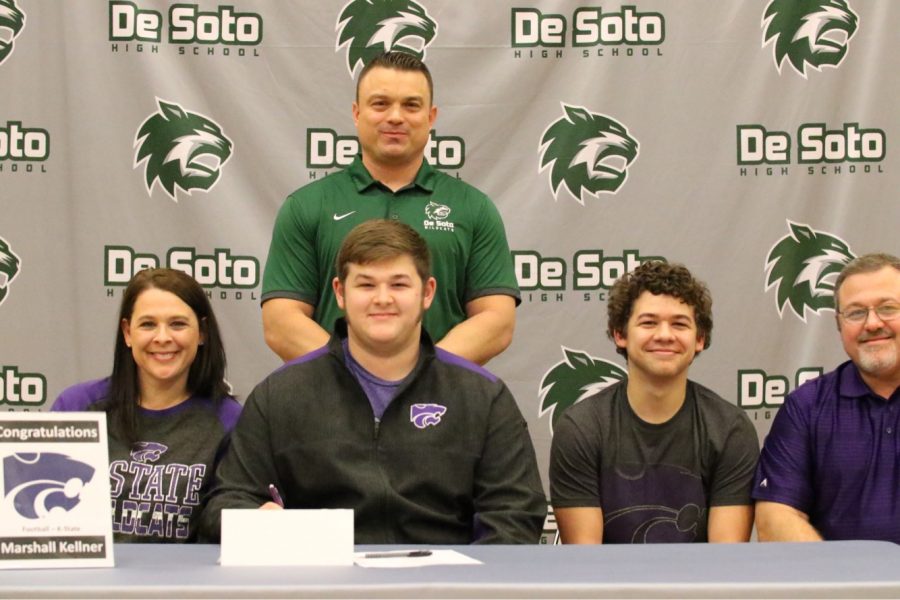 When senior Marshall Kellner moved from his minuscule town in Lampasas, Texas – an hour north of Austin – to De Soto, he continued to do what he knew best: play football.

Kellner, an offensive lineman for the team, considers himself a “technical player.”

“I like to know everything going on in the field,” Kellner said. “I like the mental game as well as the physical game.”

Kellner began playing football in the fourth grade, valuing the ups and downs of the game.

“It makes you a better person by having the hardships it gives you, as well as being able to work with a team,” Kellner said.

De Soto head football coach Brian King holds Kellner in high regard for his “consistency and ability to grind all the time.”

“He doesn’t have off days. He’s here every morning at 6 a.m., working hard in the weight room, then goes out in his class schedule and takes AP classes and excels there,” King said.

A 4.2 grade point average student with a 32 ACT score, Kellner believes football is to credit for his academic achievement.

“It kind of prompts you to get good grades because without them you can’t play,” Kellner said.

Though he stands on the quiet side, Kellner has marked himself a leader on the team. According to King, “he speaks with his actions.”

With his leadership abilities and above average academic achievement, Kellner signed to play football at Kansas State University on Feb. 8, where he will pursue a a degree in mechanical engineering.

Due to his intelligence and ability to outwork others, King sees a promising future for Kellner at K-State.

“It’s gonna take some hard work, but he’s a kid that can look past that instant gratification thing and see a longterm picture and grind it out,” King said. “I have complete faith in him.”