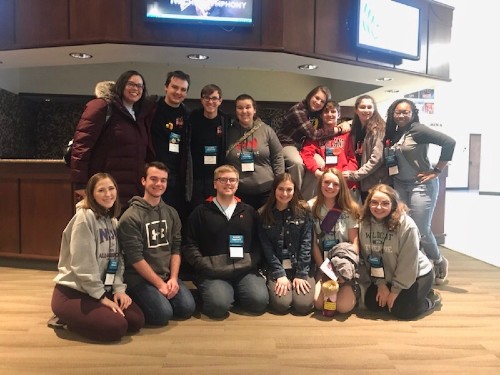 During the weekend, students had the opportunity to watch various shows, attend workshops, perform in individual events and even audition for colleges.

The whole troupe of DHS Thespians were able to watch Pippin, Miss You Like Hell and All My Sons.

“It was great to see young actors do more dramatic works and works that have characters in it aren’t high school students. All of the characters in All My Sons are adults and you would never have guessed that it was teenagers acting on the stage,” said theater teacher Sarah Cronkleton-Kidd.

However, students did not just watch shows while at this event, they performed. Students were able to compete in individual events such as solo musical, group musical, monologue and tech competitions.

“In individual events, you get the critiques from someone who isn’t me. It’s good to get criticism from other respected theater people as well,” Cronkleton-Kidd said.

According to Cronkleton-Kidd, earning a superior rating means that the students can “go on to compete at the national level in Bloomington, Indiana, this summer.”

In addition to receiving a superior rating, Kennard was one of 10 students to be awarded the Kansas Thespian Scholarship.

“It [winning the scholarship] took my breath away. I didn’t even know I was eligible for it,” Kennard said. “As musical theater performers, we are always hard on ourselves, so I never thought I could be recognized for anything and being recognized by a whole convention was crazy.”

In the time that Kennard and other Thespians were not auditioning for colleges they were attending workshops. These workshops covered a wide variety of theater topics, ranging from dance to character development.

“I went to swing dance, then acapella musical. It was cool. We did “King of New York” from Newsies acapella and then we danced to it,” Kennard said. “The last workshop I did was called the Kinky Showman. It’s funny. It was just choreography from The Greatest Showman and Kinky Boots.”

The DHS theater program posted a video on Instagram of members learning how to swing dance.

According to Kennard, learning to swing dance was “the most notable part of this whole experience” and was awesome for them to learn the basic steps of swing.

Learning to swing dance is not the only thing that students gained from this experience.

“They [students] gained the opportunity to work with others, collaborate with others and see how other schools do shows,” Cronkleton-Kidd said. “You also get to be around other kids who are doing the same thing as you.”

According to Kennard, the three words to describe Thescon are “enlightening, fulfilling and passionate.”

If a student is wanting to attend next year, all they have to do is become a Thespian and follow these words of advice.

“Embrace everything because I heard from many instructors there that ‘you look just as silly as the person next to you,’” Kennard said. “Go to workshops that you find challenge in.”