Rain or shine the band plays on 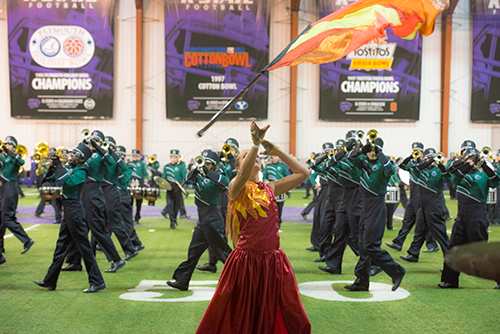 Junior Lilyan Rodriguez performs a spin toss during the performance on Oct. 6.

The stadium goes dead silent as the band is called to attention and takes the field. The suspense builds as the lights blaze down, the weight of thousands waiting for a show are on the band and the adrenaline is rushing through each member’s body as they hope that they don’t make a mistake in front of thousands of people.

This exciting scene is what the 170 De Soto High School marching band members would have thought and seen when they performed at the Bill Snyder Family Stadium during the Central States Marching Festival on Sat. Oct. 6.

However, due to weather, the DHS band had to move itsperformance into the indoor practice facility with a much smaller audience.

The indoor practice facility limited the number of audience members and prevented the Kansas State University Marching Band from performing one of their halftime shows at the end of the festival, a tradition at this festival.

According to senior drum major Savannah Stine, the rain “dampened everybody’s spirits,” and disappointed the band.

Some band students were really looking forward to performing in front of a larger audience.

“It was kind of disappointing not being able to play outside because there was going to be thousands of people watching,” said sophomore mellophone player Alyssa Waltrip.

In addition to the weather being an obstacle, the band also did not receive any time to warm up before the actual performance.

“We had to go straight into the performance. If you don’t warm up an instrument, it is very difficult to play the harder notes,” said junior clarinet player Lauren Mallicoat.

Though the band faced hardships, they still performed well and received a 1 (superior) rating. The conditions were not ideal, but the challenge allowed the band to grow from this experience.

“It’s good for people to have challenges. This is a good example of what life will do to you. You have no control over it,” band director Matt Bradford said. “That [in challenges] is where you show your true character.”

The next event for the band the Baker University Marching Competition on Wed. Oct. 10, where they have the chance to claim Grand Champions for the fourth year in a row.